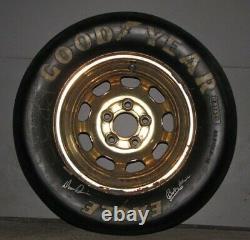 RARE Vintage 1980's BOBBY & DONNIE ALLISON SIGNED RACE USED NASCAR TIRE & RIM. This was acquired from its original owner with no documentation, and is guaranteed authentic. We understand that it is from the 1984 season, and the signatures of Bobby and Donnie were obtained in person. It is believed to be off of Bobby's #22 Winston Cup car.

This desirable piece would go well in a collection. We have described it to the best of our ability. Robert Arthur Allison (born December 3, 1937) is a former American professional stock car racing driver and owner.

Named one of NASCAR's 50 greatest drivers, he was the 1983 Winston Cup c hampion and won the Daytona 500 three times in 1978, 1982, and 1988. His two sons, Clifford and Davey Allison , followed him into racing, and both died within a year of each other. Donald "Donnie" Allison (born September 7, 1939) is a former driver on the NASCAR Grand National/Winston Cup circuit, who won ten times during his racing career, which spanned from 1966 to 1988. He is part of the "Alabama Gang, " and is the brother of 1983 champion Bobby Allison and uncle of Davey Allison and Clifford Allison.

This item is in the category "Sports Mem, Cards & Fan Shop\Game Used Memorabilia\Racing-Auto"." and is located in Lake Winola, Pennsylvania.

This item can be shipped to United States.