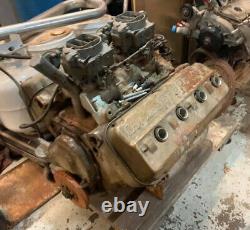 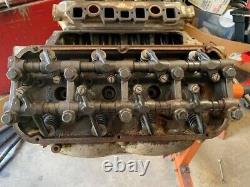 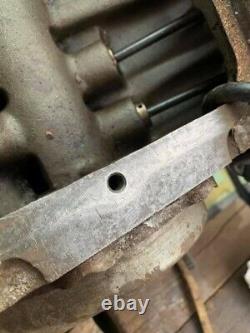 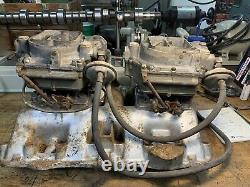 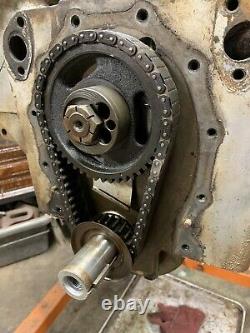 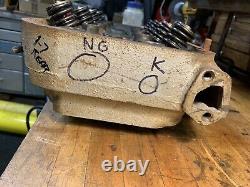 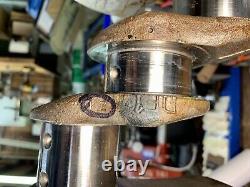 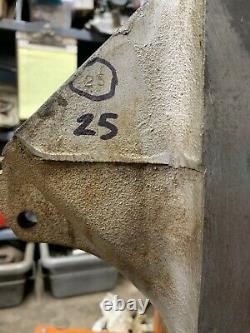 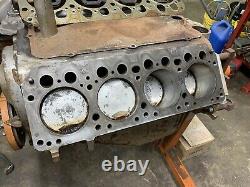 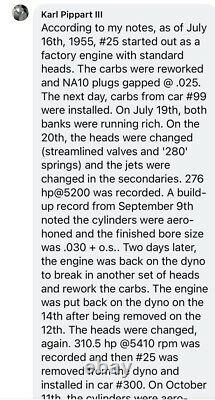 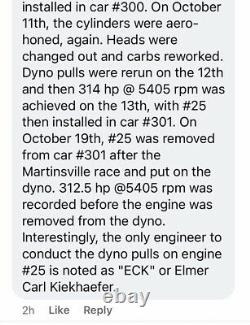 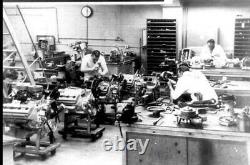 1955 Chrysler 300 KIEKHAEFER NASCAR TIM FLOCK Race Winning Engine DOCUMENTED 331. Many many more photos are available showing the disassembly and inspection process of the engine feel free to message me and I can send them to you. The engine is almost completely disassembled and carefully marked and organized in plastic tackle boxes and tubs. It is complete as shown in the first photograph.

It was alleged to have been built up by Carl Kiekhaefers nascar race shop but the documentation had been misplaced over the years. The previous owner bought it in the early 80s from the owner of a salvage yard in Oostburg Wisconsin. Who represented it as having been built and run by Kiekhaefer. It was mounted to a wooden pallet with a cardboard cover for it, both of which were discarded over the years. I will provide all information, contacts and copys of all the correspondences with various people tracking down the information.

I carefully dismantled the engine and examined and documented all the various parts, their measurements and all the different numbers and letters stamped on the various parts as well as different paint markings. In an attempt to verify if the story on the engine could be correct, I contacted Mr Karl Pippart III who wrote the book Operation Mexico! After examining the engine parts, their condition and various internal and external non chrysler stampings, Karl determined this was in fact Kiekhaefer built and was engine number 25 as stamped on the front right portion of the block. Mr Pippart III has the copies of the original dyno paperwork for this engine and he provided me the information Ive shown in the pictures. Ill also note the engine has no serial number stampings typically found just in front of the valley pan. Based on the dates in the dyno papers the engine was installed in Tim Flocks number 300 car for Four races. Langhorn Speedway 250 - Flock finished 1st. Raleigh Speedway 100 - Flock finished 3rd.

Greenville Pickens 200 - Flock finished 1st. Lehi Memphis Arkansas 200 - Flock finished 4th. The engine was then installed in Fonty Flocks #300 car for Martinsville that same year and it recieved a DNF due to transmission failure. If not there, it would have been from Carl Kiekhaefer himself.

Now the engine itself is in remarkable shape. It appears that it was thoroughly coated with some type of preservative oil which over the years turned to a varnish and locked the motor solid.

Lacquer thinner seemed to loosen this up and everything was carefully dismantled over the period of a couple of months. It has virtually no wear on any of the parts. I believe it was probably honed after it was removed from fontys car and then never used afterwards. The piston skirts are beautiful.

The cylinder bores are stained from the preservative oil but are otherwise gorgeous with no ring ridge whatsoever. The crank is std/std #1619647 with stamped K2 just forward of the #3 main bearing: The bearings still have their Chrysler paint stamping on the back side.

The pistons and rods assemblies were weighed and they are perfectly balanced to each other all weighing 1552g with bearings installed. I assume they went through batches of rods just looking for similar weights which would explain the different DF numbers. Block casting date is June 14 1955.

I removed two valves from one cylinder head and they too have virtually no wear. I cleaned the carbon from several combustion chambers for inspection purposes.

And old racer had the theory that they would leave the chambers with carbon in them to help add to the compression ratio. The heads have various numbers and letters stamped on them. Many Ks and what I assume are other internal identification numbers and numbers for each side of the chamber 1-8 I assume for organizing valves. Theyre standard 1955 issue 1556157-1 castings. The valves are back cut and polished which matches what is noted in the dyno paperwork. The intake is correct 1955 300 by casting number 1634285. The carbs are Carter WCFB body number 0-966 and both have had the choke butterflies removed and the carb tops plugged and machined to improve airflow. I have not removed the carburetors from the intake or disassembled them. The engine has factory adjustable rockers as all 300s had. Oil filter assembly is stock and has what appears to be an unused Mopar Micronic oil filter #1556834 installed. Distributor is marked 1779852 IBP4002D 11 L348036 It appears stock with the exception of a Brass Mallory #36 condenser. I havent disassembled the distributor at all. It is missing the cap and wires. It does have 7 of the NA-10 spark plugs noted on the dyno papers. Fuel pump is a Carter MO-1053.

Mounting flange is stamped M2413S and F62G. Exhaust manifolds are correct four bolt flange 1536377-1 Both have the letter H stamped in them.

They match the Hs stamped in the heads. I have all the original gaskets as well. If you wanted to run this engine I would remove the remaining varnished up oil from the rings and you could reassemble and run it with all the parts here.

I wouldnt hesitate to reuse anything. Im happy to answer any and all questions you may have and happy to take additional pictures of anything you might want to see.

The seller is "jonnyjeanjacket" and is located in Dousman, Wisconsin. This item can be shipped to United States.